Fabric Weaving was a craft I had always aspired to over the 40 years that I have been involved in craft enterprises but never had the knowledge to pursue. A chance encounter with an English weaver, living in N.W. Spain – Anna Champeney, gave me my first insight into the wonderful world of weaving.

I signed up for an “assistantship” with Anna in March 2007 for 3 weeks. Before that, however I did a challenging 8 week course (1 day/week) with an Irish teacher, Maire Ni Neachtain in Clontarf, Dublin. 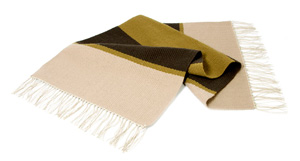 My assistantship was very thorough in all aspects of weaving, dyeing and finishing fabric as well as the analysis of the structure of fabric. What I was specifically interested in was traditional “Felpa” weaving. Felpa weaving is the traditional weave used to make a thick pile fabric and was used to create bed covers to keep out the cold in winter in the mountainous region of Galicia.

The women began their trousseau at an early age and made these covers in conditions of poor lighting and rudimentary looms. The wool (weft or cross threads) which was woven on a linen warp (long threads) was hand dyed with natural dyes like lichen, cochineal, and indigo. Patterns often included Fleur de Lis, crosses and their own initials. It took years to make the bed cover that had to last for a lifetime. Anna has resurrected the art of Felpa Weaving and indeed is an authority on the subject. 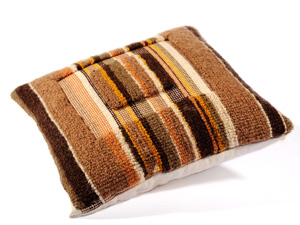 In March 2009 I attended a 5 day course with Jason Collingwood, son of the famous Peter Collingwood, who is himself an accomplished rug weaver and international teacher. There I acquired some experience in Shaft Switching Technique which allows one to change the position of the pattern in Block Weave leading to endless design possibilities. The experience of studying with Jason has brought rug weaving into a new realm for me. 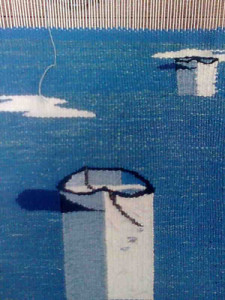 A tapestry in the making.

My other project is Rug Making. I began using Navan carpet wool but have evolved to spinning, dyeing and weaving my own fleece or fleece supplied by Kerry Woollen Mills. I pride myself on the detail and care with which I use unique patterns and combinations of hand-dyed colours all from natural dyes.

There are no chemical dyes (called acid dyes) used. Most of the dyes are collected from my own farm or the surrounding area on the banks of the River Boyne. I also use some dyes sourced by suppliers of foreign dyes which are all natural too.

After a very slow start and a huge amount of persistence I have created a range of homespun and hand woven carpets as well as a range of hand dyed and woven design led cushion covers.